We were on our way back from Butte, checking out the Three Bears Alaska store there (what is the deal with that?) when Tater Tot fell asleep. We know the rule about letting sleeping kids lie so we decided to take a side trip along Lost Creek Road up to Lost Creek State Park. 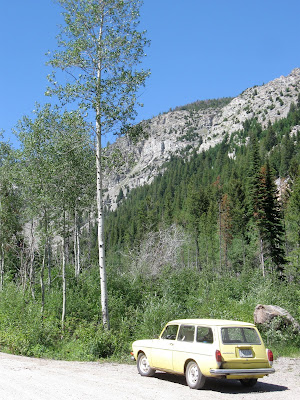 The entrance was clogged by some older dude and his wife trying to turn their rig around--a big truck with a big fifth wheel camping trailer goosenecked to it. He wasn't doing a good job. Gertie is small and nimble so she slipped by, only to be halted by the guy's whistle. Paranoid that I am, I expected him to inform us that our car was hemorrhaging some fluid or other but he just asked us "if there's a place up there to turn around." I told him there was. 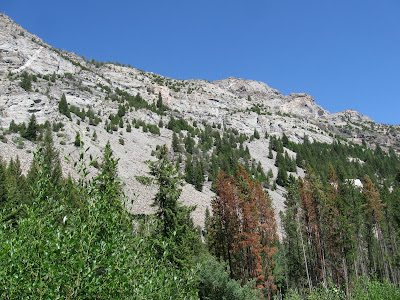 The road lightly winds up the canyon which gets to being pretty steep and narrow. See how many dikes you can find on this section of the canyon's North wall. 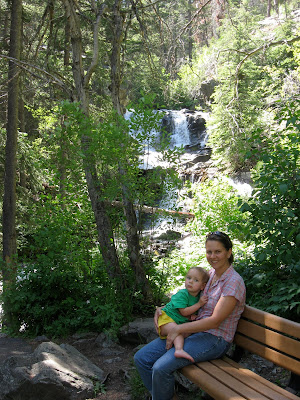 Tater was still asleep at the end of the road, so Melissa and I took separate hikes (walks, actually) to the waterfall. The main campground is the trailhead. There's another trail that goes way back to the source of Lost Creek but that kind of trek wasn't on our minds, this day anyway. The kid eventually woke up and we walked with her to the falls. She liked it in her own cautious way. 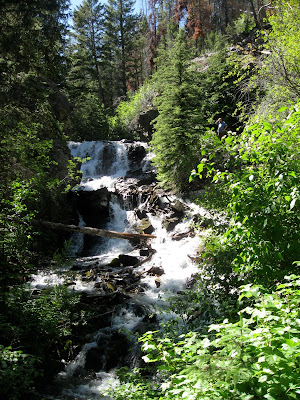 
That's the waterfall, Lost Creek Falls. This is all about half an hour from our front door (click the miles at the end of the post for a map). 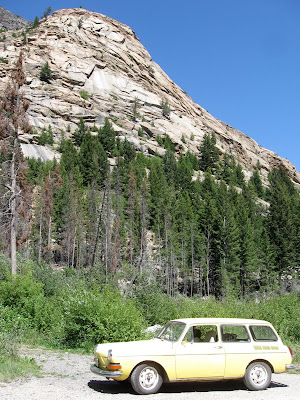 For her part, Gertie was delighted at the prospect of getting some dust on her tires. Rally ready!
We all thought the park was cool, and since its proximity (did I mention it's only a half-hour away?) can't be beat, I imagine we'll be making this trip a lot in the coming years.
(miles 3618-3631 (click for map))
post script 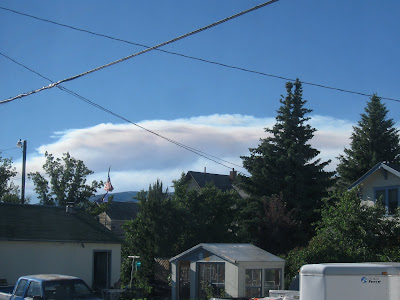 When we got back into town our across-the-street neighbor asked if there was a fire someplace. "Why would he ask that?" you ask. Because he saw this pyrocumulus building off to the Northwest. It turned out it was some trees being converted to charcoal and gas back in the Sapphires someplace, maybe sixty or so miles away as the crow flies.