Look, if you had one shot, or one opportunity
To seize everything you ever wanted-One moment
Would you capture it or just let it slip?

You better lose yourself in the music, the moment
You own it, you better never let it go
You only get one shot, do not miss your chance to blow
This opportunity comes once in a lifetime yo

The above photo is the culmination of a twenty to thirty minute multiple detour in Detroit, Michigan. I was recently there - my dad and I were coming back from Canada from our yearly fishing trip. Somewhere around Detroit, I spotted the above bus, broken down on the side of the road. I pointed it out to my dad, and said, "That's a Sportsmobile, just like mine."

And I kept driving. But...that bus was haunting me. In my family we call it a "missed opportunity," like when we were in Ireland this summer and DIDN'T walk across the Carrick-a-rede rope bridge, even though we were there. Major missed opportunity.

(This is not me on the Carrick-a-rede rope bridge. It IS a picture I took from afar, after being the victim of a missed opportunity that was largely my fault.)

I mentioned this to my father, as we were driving. The whole missed opportunity thing. By now several miles had passed between us and the bus. I told him I was turning around.

"It WILL be a missed opportunity - that bus will be towed by now," he said. But I would not be swayed. I had to drive a few more miles to the next exit, and finally got turned around. Then several minutes later we finally made it back to where the bus was, and I was about to pull over...but now it looked funny. It was on the back of a flatbed getting ready to be towed! I wasn't about to pull over on the busy Detroit freeway to spark up a conversation with the tow truck driver about what I was doing. And I didn't have the camera out for a shot.

So I had to go to the nearest exit AGAIN to turn around and try to get ONE SHOT with the camera. My dad said, "You'll never make it. It will be gone by the time we get back." And, it almost was. So now I'm going 70 mph in the left lane trying to zoom the camera while driving to get the perfect shot.

My dad offered to take the photo.

This is an example of my father's photography. My grandfather was apparently quite a good photographer, and was in camera clubs. I'm guessing my father was not. This is the first muskie I ever caught (and the only photo of it) - I am on the right. My brother-in-law nearly died laughing when I first showed him this picture. I wasn't as happy. Luckily, I have mad Photoshop skills, and managed to fix it.

The bus was rapidly approaching on the left, and was about to be towed. So, I only had one shot to get the photo...and I got it. Barely. The Eminem song Lose Yourself was going through my head...fitting, because right after I took the bus photo I took this one:

(The third verse of Lose Yourself may be one of the all-time greatest rap lyrics...this song is kind of like the Rocky of rap songs. 8 Mile was a pretty good movie too - but depressing.)

This is an awesome post. Where can we see the photoshopped muskie image?

Thanks! Here's the Photoshopped version where I added my head (and the top of the guide's head): 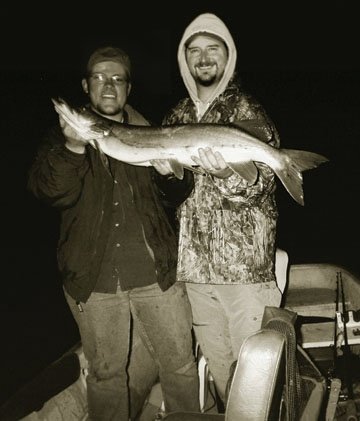 Wow! That is some skills! Nice work!