Tucked away up the West Fork of the Bitterroot River is Painted Rocks State Park, a decent park on the Painted Rocks Reservoir. It's not on the way to anything (in fact it's very out-of-the-way) but it is certainly enjoyable, especially if you were to bring a canoe. The walks along the shore are pleasant as well. 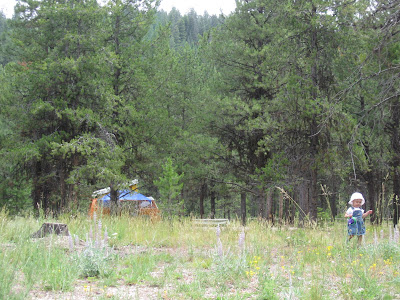 Most sites are along and above the water on the Southeastern shore of the lake. The boat ramp/swimming area is a little North of there and is a pretty active place, so the further away from it the better. Unfortunately there are an abundance of jet skis, I suspect primarily on the weekends. I think, but don't know, that this park would be ideal in the early and late seasons, and better during the week. It is open year-round. Nights are likely to be chilly regardless of the time of year. The road is paved the whole way, if I remember correctly.
The spots are perfectly flat in sparse conifer, many will take two VWs. They also lie just off the road, but since the road doesn't go anywhere it's not really noticeable. There is supposed to be water, but when we were there there was some kind of contamination problem, so it was turned off. There are vault toilets. The camping fee for most Montana state parks with water and trash is $15/night, but the website doesn't list a fee anymore (which is usually the case for campgrounds without water). This makes me suspect the water problem hasn't been cleared up (as of June 2010), so bring in your own, but also bring some cash just in case.
I've probably made it sound mediocre at best but really I think it's nice, overall. And the drive is gorgeous (no, the rocks aren't really painted). It'd be a great place to spend a week during April or October (if you weren't afraid of some cold) just getting away from everything.
Park website
Area map