Information for anyone considering a VW-powered trip to The Treasure State, not just those of us who live here.

We have found that one of the coolest functions of this group is that VW owners can now get campground advice from other VW owners. This allows us to share info like which sites can take two VWs, which sites are flat enough to camp, and which sites allow for a group camp.

Montana is divided geographically by the Rocky Mountains, which trend NW-SE through the Western third of the state. On the Western side are expansive conifer forests and plenty of ice-cold, clear blue streams and rivers (though plenty of dams too). Some areas might bring the Cascades to mind.
As the Rocky Mountain Front smooths out into the Great Plains of North-Central and Eastern Montana, the topography ranges from rolling hills to dead flat, with some island mountain ranges here and there. It is drier and less forested to the East.
The climate is largely determined by two factors: position East or West of the Rocky Mountains, and elevation. Summers are somewhat short and not usually terribly hot. Even the hottest of days have cool nights. The East has hotter Summers than the West. In the mountainous parts of the state, including the West, snow can come at any time, especially as you go up. For instance, there've been two June snows in Missoula (at ~3200') out of the last six. Winters on either side of the Divide are cold, sometimes brutally so (the coldest temperature ever recorded in the Lower 48 was taken near Rogers Pass: -70F). Wind is more of an issue along the Front and to the East, though any decently steep-sided valley can issue punishing winds to inhabitants. The weather dictates the camping season to the extent that access roads and grounds usually aren't plowed after snow. A first good snow will likely fall sometime in October. Water at most campgrounds is shut off during the Winter as well. Though this varies greatly with elevation, snow generally disappears by late April. 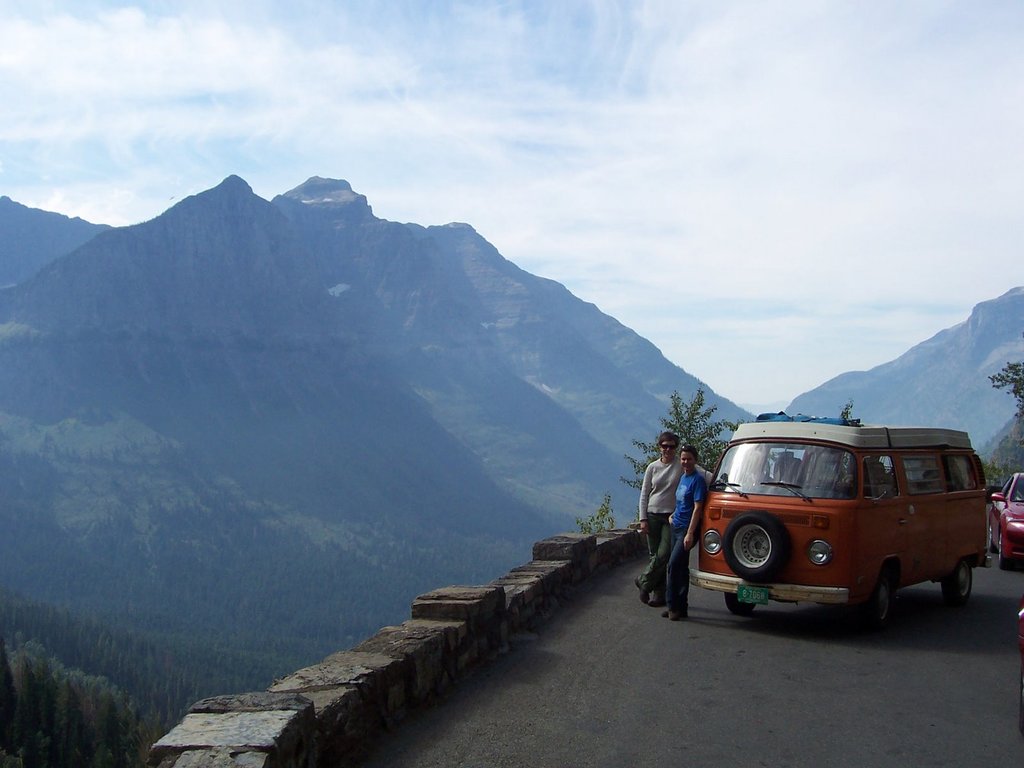 Montana can wholly claim one National Park, Glacier, but often in Montana guidebooks you'll see that Yellowstone is taken as a de facto province of Montana that just happens to be almost entirely in Wyoming. There are also dozens of State Parks, and untold thousands of square miles of National Forest and other BLM lands to be explored.
Montana's vast size (smaller than California by only 16,000 square miles) but small population (one million) make it a great place to explore. Those who've spent time in both say that Montana--Western Montana, at least--"feels" more like Alaska than any other state (except, of course, Alaska). Larger population centers are Billings, Missoula, Great Falls, Butte, Bozeman, Helena, and Kalispell, though "larger" and "population center" shouldn't deter you: Billings is the biggest city at ~100,000; and within less than an hour's drive from most you can be completely lost in the woods and/or mountains.
Driving your well-running ACVW around in Montana shouldn't prove much of a chore. You almost certainly will climb a pass or three on your trip, probably in 3rd gear (1700/1800/2000 operators will feel the burden of terrain somewhat less than 1600 operators), and other drivers are pretty forgiving. Montana has among the worst, if not THE worst drunk driving problems in the country so be on high alert, especially at night. Carrying chains is strongly recommended October-April, especially if you're going to leave paved roads behind. I like to drive with my lights on all the time.

The state is packed with wildlife, ranging from possible "What was that thing?" little bumps under your tire to potentially life-ending collisions with bighorn sheep, elk (rarely), moose, and deer. Particularly deer. Be most vigilant in Spring and Fall, and in the hours around dawn and dusk. While camping, be aware that bears are everywhere so keep a clean camp. Local lore says that outside of the city in the Western Montana you are never more than 300 yards from a mountain lion so keep a close eye on the little ones-put them between the adults during the hike and never at the end. Bear and puma encounters are quite rare (they'd really rather keep to themselves), so don't let it scare you or anything.
During hunting season you will hear gunshots, you will see hunters, and you might even see pickup trucks with large, dead mammals in them. You might even (like I did) see a mid-80s Subaru station wagon being driven by a slip of a girl with blonde pigtails driving down the road with a 8-point buck strapped to the top of it. Hunting is taken seriously here, and most of it is not purely recreational. Keep in mind that, whatever your personal beliefs, the majority of hunters are scrupulously respectful of the land and the game. You are not likely to be shot unless you run your mouth a lot about the immorality of hunting (even then the danger is quite low).

Fishing, in Western Montana at least, transcends mere sport and has attained the level of religion. No kidding. A River Runs Through It was written about this area. The trout fishing around here is considered among the best in the world by many of those who know what they're talking about. Get a license and see what it's all about. Catch a brookie as the sun sets on the lake and fry him over a fire for supper--fish will never taste better.
With certain restrictions, trapping is allowed on many federal and state lands, including parts of national forests. While I'm not familiar with rules about how and where traps are to be set, I am familiar with the fact that dogs are maimed and die every year out here after being caught in traps. Where dogs are allowed, please keep them on a leash and on the trail--hearing about someone's pet getting her leg or neck snapped in one of these damned things is heartbreaking.

See the Campground Map tab at the top of the page for the Montana campsite locations reviewed below, and more.

Let's get this out of the way right off: Lewis and Clark never visited the…Continue

This is one of several campgrounds at Georgetown Lake, and I believe the biggest. There are a lot of sites, some seem to be packed in more closely than others. The pads are all paved.…Continue

Located just off Montana Highway 1 to the West of Georgetown Lake in the Pintlers. Probably a great place to try when the campgrounds around the lake are full up.Some of the 16 sites are huge and…Continue

A quick few miles off I-90 at either exit 283 or 278, this decent little park is a good spot to spend a day or two. There are several modest hikes where one can leisurely explore along the river(s),…Continue

A small but magnificent gem tucked away in the Southern reaches of the Flint Creek Range, Lost Creek State Park has 25 sites arranged among aspen and tall, thin evergreens, all within five minutes'…Continue

If you don't know yet, there's an outfit renting Westy campers in Missoula now. I've always wanted to camp in Montana but it's a two-day drive just to get there from Sacramento. So maybe I'll try the…Continue

On your way along I-90 in Western Montana, you'll have the option to take the…Continue

Since Beavertail Hill State Park sits about 400 ft from an active railroad and maybe 800 ft from I-90, hardcore car-camping enthusiasts may deride this choice, but I stand by it. The trains are the…Continue

Tucked away up the West Fork of the Bitterroot River is Painted Rocks State Park, a decent park on the Painted Rocks Reservoir. It's not on the way to anything (in fact it's very out-of-the-way) but…Continue

This isn't a campsite review exactly, but it is a suggestion of where to go if you're near the west side of Glacier National Park (GNP)...it's not a developed campground either.Starting from the west…Continue

Comment by westywoman (Melissa) on January 30, 2010 at 9:12pm
I have many reasons I want to visit Montana but my busy season is your camping season. Arrgghhh! Any chance that October is doable? I don't mind cold, but snow is problematic.

Comment by whc03grady on January 31, 2010 at 1:10pm
You'll run a good chance of seeing snow in October, depending on elevation and how late in October.

Comment by whc03grady on January 31, 2010 at 1:11pm
October is prime time for Yellowstone though--no crowds. Maybe some snow.

Comment by Japhy Clifflemmy Campbell on June 25, 2011 at 3:47pm
I lived in Missoula, I got my 75 westy there and been all over that area. I love it and miss it!

Hi, we just joined this group.  We live in Helena.  The comments to date are mostly about west of the divide and there haven't been any for over 2 years.  Two thirds of this state lie east of the divide and the Missouri and Yellowstone rivers provide some incredible camping, scenery, hiking, canoeing, kayaking and fishing.  You can follow Lewis and Clark all over this country and be mostly by yourself, although you may have a few insect friends.

Hi all, I don't live in Montana, but we do live in NW Wyoming and our 78 Westy has taken us fishing all over the Northern Rockies. The camping and fishing is great in both states but the passes do test your patients.30mph up and down hill!

You need to be a member of Montana Camping & Driving to add comments!