On your way along I-90 in Western Montana, you'll have the option to take the Pintler Scenic Route (spelled "Pintlar" on some signs). My advice, especially for those Eastbound (better views of the mountains, unless you sightsee in your rearview mirror), is to take it. Your trip will increase by about ten miles and maybe forty minutes, assuming you don't stop along the way.

If you're Eastbound, the exit to take is 153 at Drummond. Westbound travelers take exit 208 toward Anaconda and the big smokestack. The road is officially designated as Montana 1. It is an all-weather highway and is plowed year-round but hazardous conditions may exist, especially around Georgetown Lake in Winter. There are deer everywhere.

Call the Pintler Ranger District in Philipsburg for campground availability, particularly out-of-season. A great map of the area and its campgrounds is here.

Like I said, your drive will be about forty minutes longer if you don't stop, but there're plenty of reasons to stop. Let's say you're Eastbound and are getting off at Drummond (Westbounders can of course reverse the following):

You'll drive right toward the foothills of those craggy peaks you've been admiring off your passenger's side for the last five miles or so, the Flint Creek Range. Drummond is a good place to get some gas if you're low. The first ten miles or so, through the tiny farming town of Hall, are fairly straight and level. This stretch of road is on the very upper reaches of Glacial Lake Missoula, the giant lake that periodically filled all the valleys in this part of Montana as recently 12,000 years ago. 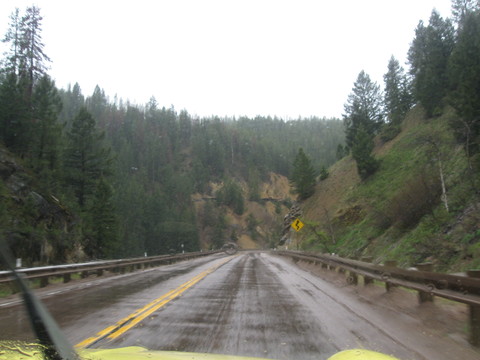 The valley closes up fairly abruptly a few miles past Hall, until you reach Maxville. Maxville isn't much of anything--even less than Hall--but it is a turnoff point if you want to get off pavement and explore the Flint Creek Range. You can drive pretty deep into them, but road conditions aren't going to be the greatest. Snow will also block most of them between late October and late April. You'll also want to do some checking to make sure you're camping on Forest Service land.

The lovely little twisting creek running alongside the road is Flint Creek and five miles or so past Maxville its valley widens again into about the prettiest place you're likely to see. The Pintlers (also called the "Pintlars" or the Anaconda Range) are now in full view in front of you; the higher peaks you can see top out at well over 10,000 feet (this is the view you'll have to stop and turn around for if you're taking this road Anaconda-to-Drummond). To your right are the Sapphire Mountains, named for the little light blue stones littering the creekbed gravel in these parts. Watch it around curves--sometimes ranchers drive cattle across the road and it's not like they warn you they're doing it. 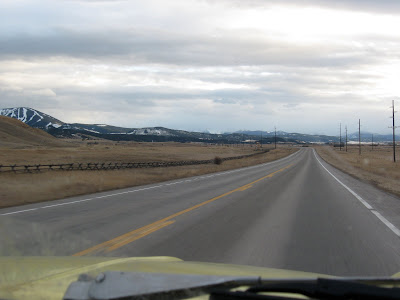 To try your hand at gem hunting, stop in Philipsburg ("P'burg" locally) at any of a few places that'll sell you a bucket of gravel to sift through. P'burg is a quaint little near-ghost town--it used to be about a thousand people bigger--that has really done a good job at retaining its dignity and spirit. The Broadway Hotel has great, if not a little cozy, rooms if you want to spend a night indoors. Ask a local how to get to Granite, a ghost town (now State Park) back behind P'burg which is still in decent shape. Or check out any of several ghost towns around here, actually. Things do really slow down in Winter, though there is skiing at nearby Discovery Peak.

About six miles beyond Philipsburg you'll come to an intersection with Montana 38, the Skalkaho Highway, a topic for another time. For now we'll just consider the sign a warning that the road is about to quit skirting the mountains and plow right into them, which it does presently as you round the corner. Your old Volksie is going to appreciate your using third, and possibly second, gear in just a bit. There are plenty of turnouts if you feel bad about the traffic behind you. Other drivers are forgiving (don't expect to be harassed), but locals do drive pretty fast on this stretch, especially coming down. You'll want to pull out a lot anyway to get a load of the sights. This is where Flint Creek dives out of the mountains of its source. The wooden ruins you see along the other side of the valley are what's left of a sluice system that transported water from Georgetown Lake to mining and smelting operations around P'burg. There's a nice campground right around here, Flint Creek Campground. 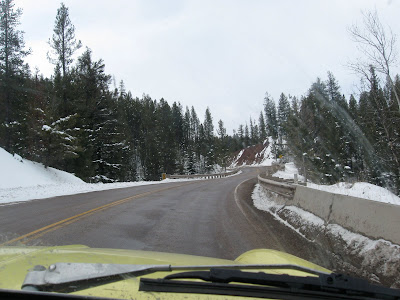 As you climb past some pretty imposing roadcuts, keep an eye out for a little waterfall on your right and you'll know you're almost done going up. Suddenly you'll see a somewhat inobtrusive dam and then, the next thing you know, Georgetown Lake. It's decently-sized and high--6,400 feet. The road will level out and you'll likely notice the locals (Montana plates beginning with "30" and "46") driving even faster along the lake. For a pleasant detour around the lake, take Georgetown Lake Road. Watch closely for it if you're headed Westward, because it'll sneak up on you; it's right at the dam. If you're headed toward Drummond and want to drive around the lake, take Denton's Point Road on your left a little over a mile past Silver Lake. Georgetown Lake is pretty heavily developed, with lots of houses and full-fledged neighborhoods around it. Personally, I'm not a big fan. The lakeside campgrounds are often full and crowded and the lake is rife with jetskis and fast boats. But once the lake freezes, it's another story. Georgetown Lake is a great ice-fishing destination and emerging ice-kiting destination (it's pretty windy). In Summertime though, your better bet for fishing is East Fork Resevoir; watch for the signs along the lake. All that said, the lake is pretty and the only place I've seen a wild moose in Montana after four years of living here. The camping off into the forest away from the lake is better, though I suspect it can fill up quickly in season.

There's a kind-of community toward the end (or beginning, depending on your direction) of the lake informally and predictably named "Georgetown". It's not much of anything except some tackle shops, overpriced houses, and a place that I've been told serves some fantastic fried chicken.

Past the lake you'll drive past another lake, smaller and often glass-smooth Silver Lake. I don't know anything about what to do on or around it, but it is pretty. Mostly I mention it because as you go past it you'll start the long slide into Anaconda. There are a couple very nice campgrounds tucked away into the mountains, the best one to my eye being Warm Springs Campground.

You'll notice some increase in settlement as you go down the valley but not enough, it would seem, to justify the reduced speed limits. You'll want to keep sailing down the road at 65mph, but don't do it, especially in Winter as bighorn sheep tend to congregate on it and they're not skittish around cars like deer are.

As you enter Anaconda, a town much longer than it is wide, you'll notice an ominous smokestack at the far end of the valley. It's the Anaconda Smelter Stack, the tallest freestanding masonry object in the world at 585 feet. Other highlights in Anaconda include: the wonderful art deco Washoe Theater (one of the ten most beautiful theaters in the country, according to the Smitsonian); the Hearst Free Library, an imposing red-brick building commanding the corner of 4th and Main (stop inside to see the artwork and say "hello" to the director if nothing else); and Washoe Park, across the tracks (turn North on Sycamore or Main) and sprawling along Mill Creek with two playgrounds, campsites, a swimming pool, a goose pond, horseshoe pits, and the state's oldest fish hatchery.

Anaconda is a town that's been in steady decline since the 1950s, and in steep decline since 1980 when the copper smelter was permanently shuttered. The only thing left of the smelter is the stack, and there's a small interpretative park at the East end of town showing you just how big it is (you can't go to the stack itself). As you might imagine for a town that's still trying to find its economic bearings, you're not going to find any lavish accommodations, frilly boutiques, or oo-la-la eateries in Anaconda. The closest thing to finer dining is Barclay's II, a nice steakhouse and lounge on East Commercial Avenue. If you're looking to avoid Subway, Pizza Hut, and McDonalds (the three restaurant chains in town), try there or Gallicano's Pizza (very good pizza), or Donivans, both on East Park Avenue. The Daily Grind Deli and Goosetown Grill are also good. There are a couple Chinese places too.

Leaving Anaconda to the East and coming to the end of the Pintler Scenic Route, you can't miss two huge piles of, something, on your right (on your left if Westbound). That is slag, what's left over when 100 years' worth of massive loads of rock from Butte have the copper, gold, silver, platinum, lead, and zinc extracted out of them. (To see the hole(s) in the ground where all the rock came from, visit Butte and the Berkeley Pit.) The Deer Lodge Valley opens up in front of you and in about nine miles you're back on I-90.

Map of the Route